Who are the Geode Guys?

The Geode Guys or known to some as the “Dragon Egg Guys” originally began 20 years ago when the founder of “Dragon Bones” and the “Dragon Eggs”, Leo Atkinson, traded an old man one of his signature mineral sculptures for a peculiar looking machine that supposedly was made specifically to crack geodes! This machine would later become known to many of you as the Geotine (the Guillotine for Geodes). The original Geotine was made almost completely of wood. The machine has since undergone many changes to what it is today. However, what many people don’t know is that the original Geotine was not acquired with any intentions of making money from it. But one day as fate had it, Leo was outside of a Rock Shop owned by him and his wife trying out his newly acquired machine with some left over geodes from the previous owner of the Rock Shop. It just so happened that on that very day a nearby middle school was having a field trip in the area near the Stonewerks Lapidary Shop. And a curious student passing by happened to hear the “Pop” noise that the machine makes when cracking a geode. When he walked over and saw the beautiful crystals inside this otherwise ugly rock, he immediately offered Leo several dollars for the cracked geode. And before he knew it there was a crowd of middle schoolers all lined up with money in hand ready to pop a geode. As the story goes the teachers had an extremely tough time getting the students away from the “the Geode Guy.”

So after receiving an overwhelmingly positive reaction from his new machine Leo set out to find a Geode supplier. After experimenting with several different geode types, Leo realized that by far the most popular and consistently beautiful geodes were the Coconut Geodes from Chihuahua, Mexico. And so it began. The first show the Stonewerks family ever attended was the Key Largo Renaissance Festival in 1986 kids and all. At this renaissance they were first sold as “Dinosaur Eggs” before changing them to the more suitable “Dragon Eggs.” And that’s where the adventure began.

Fast forward to today and you will find the Geode Guys at numerous Renaissance Festivals and Art/Craft shows around the Country. Chances are if you’ve seen us at one of these shows that you’ve probably met one of the Geode Guys listed below. 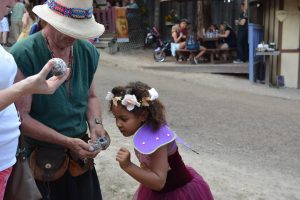 The Original Geode Guy who along with his wife developed the very first “Dragon Eggs.” It was Leo who worked the very first Renaissances and created a whole new method of popping geodes. By mixing his previous life as a salesman, along with his natural ability to charm and entertain a crowd, Leo has for years brought laughter, excitement, and education to thousands who might have never otherwise knew what a geode was. As Leo’s career as an artist in the Fossil and Mineral Medium has began to take off he has looked to some of the other geode guys to take on large parts of the businesses day-to- day activity. However, if you’re lucky you might just be able to catch him cracking geodes at an Art Show high in the Mountains of Colorado.

Being the son of Leo and Lynn Atkinson, Dusty had the Rock Hound Gene ingrained. Through growing up in Renaissance festivals and Gem and Mineral shows Dusty was bound to land in the rock business himself. Having grown up with a natural salesman as a father and visionary for a mother he has developed a keen business sense along with sharpened intrapersonal skills. After graduating from the University of Denver in 2008 with a Business Management degree, he dabbled in several other business ventures before deciding to take on the responsibilities of the day-to- day operations of the geode business in hopes of carrying on the family business through another generation.

Though not related to the family by blood, Howard is considered part of the family and is considered one of the original Geode Guys. Having met Leo at the Colorado Renaissance Festival in 1991 the two immediately became close friends with similar ideals and life experiences. However, it wasn’t until 1995 that Howard became a Geode Guy. Howard is from Eureka, Kansas and graduated from Emporia State University. He then went on to get his Masters Degree in Psychology before beginning his career on the Dirt Circuit (a term for the Renaissance circuit). Howard is now retired, but for all of his years of service as one of the Geode Guys we thought he deserved mention as one of the original Geode Guys. If you bought a Dragon Egg at the Colorado, Kansas, Scarborough, or Oklahoma Renaissance between 2000-2014 chances are you probably met Howard.

Another one of the original Geode Guys, Bryce, is also a long time friend of the family. Bryce is a veteran of the Vietnam War and also a certified masseuse. Bryce has been helping out with the Minnesota Renaissance Festival since 1995. Bryce currently resides in

Ryan is another son of Leo who was also raised in the world of Renaissances and Gem and Mineral shows. Ryan has created many of the logos for the company as well as many other graphic works seen on G.G. marketing material. Though not a full time member of the G.G., Ryan often times subs in at art shows cracking geodes.

Siara, the youngest in the family is another one of the Atkinson Children that have grown up in the Rock Biz. Sisi graduated from the University of Colorado in Boulder with a double major in psychology and Sociology. Siara is another one of the part-time expert geode poppers and can be found popping geodes on occasion at Art Shows high in the Rocky Mountains. Siara is best known for being our utility player who jumps in and bails us out when were in a pinch and need a geode expert.

Lynn along with Leo is where the love for Rocks, Minerals, and anything with geologic importance began. In partnership with Leo, Lynn helped co-found “Gifts from the Earth” back in the late 80’s mid 90’s. It was through this Rock shop that everything else blossomed from the sculptures, to the Dragon Eggs, and of course the educating of the next generation of Geode Guys/Girls. Lynn now resides in Oak Creek Colorado and continues to create and sell her own style of Fossil and Mineral adornments. Her current operation is called Moonstone Illuminations which focuses heavily on the incredibly rare and beautiful Agatized Coral specimens collected over the many years she resided in Florida.

There are no upcoming events.