Whole Amethyst Cathedrals for sale in The Geode Guys store 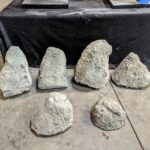 -Amethyst comes from the greek word “Amethystos” meaning “not” “intoxicate” for their belief that the stone could keep the owner from drunkness. Which is also why Amethyst has been associated with sobriety in general

-Amethyst is the February birth stone

-Amethyst is a 7 on the Mohs hardness scale

There are no upcoming events.